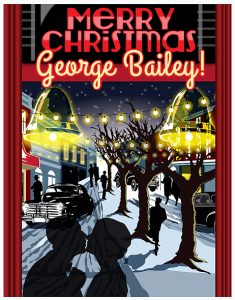 Performed as a radio play, along with the entertaining ads for Lux delivered by Hollywood reporter Libby Collins, and Hollywood actress Susan Blanchard, the play is based on the original Lux Radio Theatre version of 1947 and is offered as part of the It’s A Wonderful Life Festival in Seneca Falls. This year, the shows will be performed on 7 December 2017 at 7:00 PM, 9 December 2017 at 6:00 PM, and 10 December 2017 at 1:00 PM.

The cast appears in 1940’s costumes, and the acting is done around old-fashioned microphones. When they aren’t performing, the cast, sound effects artists and pianist follow along with the script, waiting for opportunities to add to the story. Each of the actors plays from two to as many as five characters.