Please consider Buying SEASON TICKETS or BECOMING A SPONSOR and supporting our Theater! 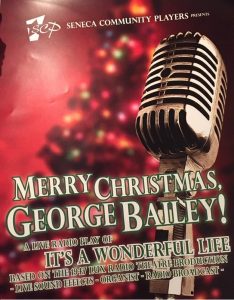 “I am delighted to announce a season that highlights “Life on the Lighter Side” with four hilarious comedies on tap for 2019,” said Jansen.  The season begins with the March production of the heartfelt and hilarious Miracle on South Division Street by Tom Dudzick followed by the inspirational funny and touching Calendar Girls by Tim Firth.  The fall finds a comedy double feature as SCP produces The Odd Couple and The Odd Couple (female) version by Neil Simon during the same weekends in November.  The return of the holiday classic Merry Christmas George Bailey! anchors a season of hilarity.  A live production of the 1947 Lux Radio Broadcast of It’s a Wonderful Life this classic, heartwarming performance has become a Seneca Falls staple of the Christmas season.

SCP opens its 2019 season in March with Tom Dudzick’s Miracle on South Division Street. The New York Times hails this as a “sprightly and gentle comedy, where revelations that might remake a family’s sense of itself are each rolled out in the service of laughter”.   Meet the Nowaks of Buffalo, NY. Clara and her three grown kids have always known they were special, ever since the miraculous night in 1942 when the Blessed Mother appeared to Grandpa in his barbershop! Since then, the neighborhood has looked upon the Nowaks’ 20-foot commemorative shrine as a beacon of hope and faith amidst the urban rubble. And now daughter Ruth unveils her plan to write and star in a one-woman show about the family miracle so the “whole world will know!” However, as her plans for theatrical immortality unfold, the entire family’s faith is shaken to the very core when a deathbed confession causes the family legend to unravel. The results are heartfelt and hilarious.

SCP brightens summer with its production of Calendar Girls by Tim Firth in June.  The Arts Fuse describes Calendar Girls “as a comedic romp filled with wit, warmth, and genuine insight”.  Based on a true story, this show has been adapted to the stage from the Miramax motion picture of the same name, and tells the story of a group of ladies in a Women’s Institute organization in Yorkshire, England who decide to raise money for leukemia research through the selling of a nude calendar. The catch? The calendar features these women themselves, who are by no means the young model-types that one may come to expect in such calendars, as the art. Soon the project, which starts in memoriam to one of the women, Annie’s, late husband, turns into an opportunity for her best friend Chris, a failing florist, to finally find her place in the spotlight. Yet as the powerful impact this small act of charity has made becomes clear to these women, they are suddenly forced to evaluate their own actions and their place in one another’s lives, leaving them as exposed emotionally as they are on each calendar page.

Neil Simon’s classic comedy “The Odd Couple” will be paired with The Odd Couple (female version) offering audiences the opportunity to see two outrageous comedies in the same weekends in November.   The New York Post declares The Odd Couple to be “Fresh, richly hilarious and remarkably original.  Wildly, irresistibly, incredibly and continuously funny”, this classic comedy opens as a group of guys assemble for cards in the apartment of divorced Oscar Madison.  And if the mess is any indication, it’s no wonder his wife left him.  Late to arrive is Felix Unger, who has just been separated from his wife.  Fastidious, depressed, and none too tense, Felix seems suicidal, but as the action unfolds, Oscar becomes the one with murder on his mind when the clean freak and the slob ultimately decide to room together with hilarious results.

Then, Unger and Madison are at it again!  Florence Unger and Olive Madison, that is, in Neil Simon’s hilarious contemporary comic classic: the female version of The Odd Couple. Instead of the poker party that begins the original version, Ms. Madison has invited the girls over for an evening of Trivial Pursuit. The Pidgeon sisters have been replaced by the two Constanzuela brothers but the hilarity remains the same.

The 2019 season draws to a close with the Christmas classic Merry Christmas George Bailey!  This original SCP adaptation of the 1947 Lux Radio broadcast of It’s a Wonderful Life has become a crowd favorite drawing theater goers from across the United States.  This live production includes actors doing all of the voices and sounds from the original production in front of a live audience. Merry Christmas George Bailey! is a can’t miss event as part of the It’s a Wonderful Life Festival.

Season ticket subscriptions go on sale January 30th.  Season ticket packages offer savings off single ticket prices and other exclusive benefits.  You get to see all five productions, no worry about lost or missing tickets.  You can come to the performance of your choice so no need to worry if you plans change at the last minute.