Seneca Falls, NY, November 1, 2017 — If you missed Seneca Community Players’ performance of Little Shop of Horrors in 1996, you have another chance to see it soon! 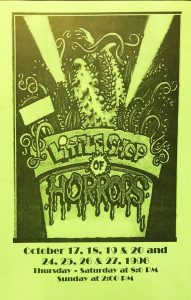 Over the last 46 years Seneca Community Players has performed and produced over 200 shows. Generally, each show involves a cast and crew of 15 to 40 people and is in production rehearsing for 6-8 weeks. After all of the time and work put into creating a show, an average of five performances are given with a limited number of people getting the opportunity to see it.  “It’s a shame that so few people are able to see and appreciate the hard work and talent that goes into each show,” says SCP’s President, Deb Bly “that is why we are inviting the public to free monthly showings of past productions.” 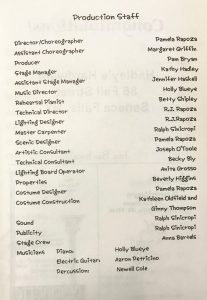 Only since the late 1970’s has video taping been available to record and preserve these performances, and since then, many of SCP’s shows have been recorded.  Recently the VHS and DVD video archives have been reviewed and some of the best performances have been  identified to be shared again with new audiences.

Come Play With Us…Again!, will be a monthly series taking place at the Seneca Falls Library.

Because many previous cast members are still associated with SCP and live in the area, some  will be attending the show to share some memories from each production.

Little Shop of Horrors was presented in the Delavan Theater at the New York Chiropractic College in October of 1996.  The acclaimed Broadway musical written by Howard Ashman and Alan Menken, and will be the first program in the series to be shown on Sunday November 12 at 3pm.

“50’s horror flick meets 60’s Doo Wop resulting in Great Music, big laughs, and lots of fun!” says the promo flyer used by SCP in 1996.  The story is about Seymour, a nerdy florist who finds his chance for success and romance with the help of a giant man-eating plant named Audrey II, who seems to have a craving for blood and demands to be fed.

Admission to Come Play With Us…Again! is free of charge and donations will be accepted for refreshments.  For more information on this and other Seneca Community Players’ productions, visit FaceBook or SenecaCommunityPlayers,org