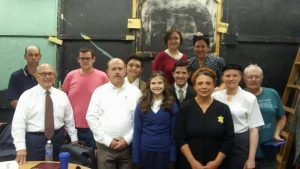 Congratulations are in order for the cast of Anne Frank! The cast and show has won three TANYS (Theatre Association of New York State) awards. The awards are as follows:

Meritorious Achievement in Production Concept and Excecution to the Director, Cast, and Production Staff;

Meritorious Achievement in Acting to Emma DeGroff as Anne Frank, and;

Meritorious Achievement in Acting to Juan Espana as Peter VanDaan.

“What happened in World War II is still relevant today. Seneca Community Players made the Diary of Anne Frank up close and personal. The intimate setting allowed the audience to experience what being in hiding was like. From the time we walk through the bookcase until we see Otto Frank return, we feel some of the pain and suffering that took place within the annex. Thanks to Eric Jansen and the Community Players, the story was brought to life.”